I sent a handful of silver bullets of to my good friend Tom Lentz in Spokane WA, who is something of an expert at reloading. He's a safety officer at the local gun range, and shoots handguns competitively on the IPSC circuit. I chose the "real" bullets based on the quality of the casting at the base; in particular I was looking for complete and well-formed driving bands and a correct crimp-groove. The nose of the bullet is relatively less important, and some of the bullets I sent Tom were pretty ugly.

While a bullet doesn't have to be pretty to perform acceptably, size is critical. I mentioned earlier that I was not happy with the inconsistent sizes of my silver bullets. In fact, quite often measuring the base of the same bullet at different spots would yield diameters a couple of thousandths different. After talking with some folks who cast bullets frequently, it turns out that this is a common problem, even with the much easier-to-cast lead. The solution, it turns out, is to use a sizing die to squeeze the bullet into a nice round projectile of the appropriate diameter. 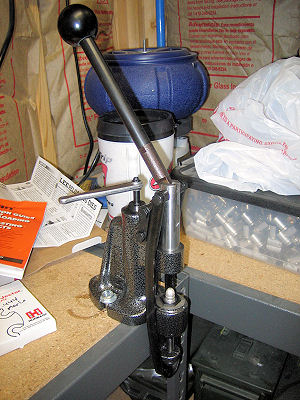 I purchased a resizing press, and dies in 44 caliber. Actually, the nominal bore size for a .44 caliber gun is .429 inches. However, after doing a bit of investigating, it turns out most folks who cast hard lead size to .430, just a smidge large. The idea seems to be that, particularly with small driving bands, the extra engraving force needed is pretty small and the extra size helps the bullet seal to the bore a little better. Not wanting to argue with experience, I purchased dies for .430 inches.

Now, if a cast bullet is too large, it's easy enough to swage it down to size in the die. However, if it's too small, we need to somehow smash it until it fills up the die. The problem is, we need to smash it without deforming the nose. At the top of the resizing press, one can install a nose-punch die, with a profile that exactly matches your bullet's nose. Then you can smash those pesky undersized bullets all you want without turning it into a flat-nosed wad cutter.

However, since I was casting from a custom mold, there was no way to buy a nose-punch die with the correct profile. Tom came to the rescue by buying a die with a similar profile, then filling it with an epoxy putty and fitting it into the press. After coating a bullet with release agent, he gently pressed the bullet up into the die and let the epoxy harden. After removing the bullet, he had a die with a cavity that perfectly matched the profile of the bullets I had cast. Give that man a prize!

The Little Bullet that Could 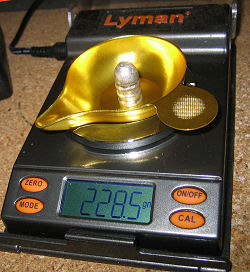 Tom weighed and measured all the bullets I sent him. It turns out there was a runt in the litter. Where most bullets weighed between 235 and 239 grains, there was one that weighed only 228.5 gains. While the other bullets were about 0.430 inches in diameter, this one was a gangly 0.427. For some reason, rather than throwing it in the garbage, Tom decided to use it to test our efforts. 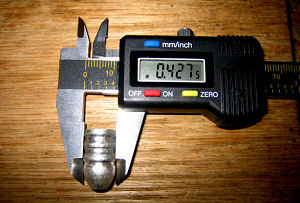 As you can see, this bullet is smaller than it should be. Will we be able to bring it up to size, and make it a useful bullet? Will the silver prove too hard for the poor sizing press, and send it to the junkyard early? Stay tuned! 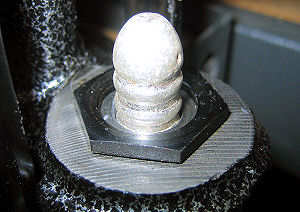 Here's the bullet in the press ready for sizing. In addition to sizing the bullet, the press also lubricates the bullet, forcing a heavy wax-like lubricant into the gaps between the driving bands. This lubricant helps reduce friction during loading and firing, and also helps create a gas-tight seal between the bullet and the bore. 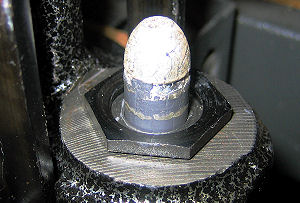 A quick pull on the lever, and this is same bullet. There's lubricant all over, but otherwise it looks pretty much the same . . . 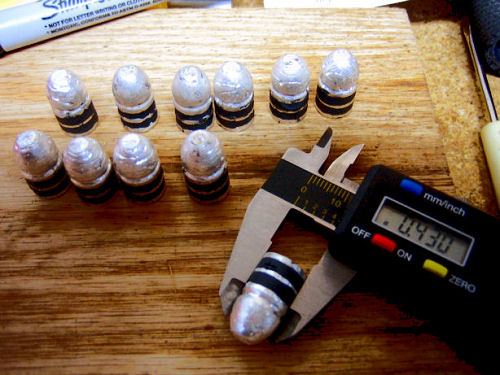 As you can see from the photo above, the sizing press did its job. The little bullet is now .430 inches and properly sized for shooting. Look at those bullets! There's a few wrinkles and casting flaws, but they look pretty functional, don't they? Compare these to the Myth Buster's silver bullet back on page 2. Now, let's hope they work better. To find out, we'll need to load them.

Next: Reloading with Silver